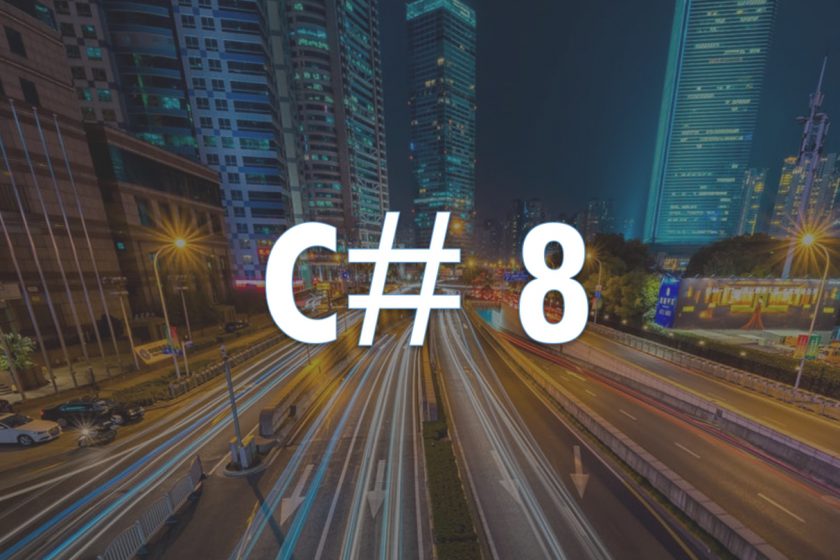 Mads Torgersen demonstrated the first four features for C# 8 in a recent Channel 9 video. C# 7 was shipped in March 2017 and version 7.1 was released in August 2017. The three languages features that were introduced in 7.1 are:

The C# compiler supports C# 7.1 starting with Visual Studio 2017 version 15.3, or the .NET Core SDK 2.0. However, the 7.1 features are turned off by default. To enable the 7.1 features, you need to change the language version setting for your project. You can edit the “csproj” file and add or modify the following lines:

You can also change the project properties in Visual Studio. In Visual Studio, right-click on the project node in Solution Explorer and select Properties. Select the Build tab and select the Advanced button. In the dropdown, select C# latest minor version (latest), or the specific version C# 7.1.

There is also a C# version 7.2 lined up with features such as ref readonly, blittable, interior pointer and non-trailing named arguments.

The language design teams meets twice a week, and have two-hour long discussions on the various issues related to adding new features to the language. There are a lot of proposals to keep track of here: https://github.com/dotnet/csharplang/tree/master/proposals. While it is interesting to see what will be added, given that these are proposals and there’s plenty of debate around the implications, there’s no guarantee that the proposed features will actually make it in the upcoming version(s).

For version 8 some features are in prototype status, some are just concepts. The first four features that should make it to version 8 of C# are:

This feature is intended to:

With nullable reference types, the idea is that reference types would no longer be nullable by default. Instead, you have to explicitly mark them as nullable using the same T? syntax that you use for nullable value types.

Assigning a null to a non-nullable reference type will be a compiler warning. Reading from a nullable type would be a compiler warning unless the variable in question was explicitly checked for null ahead of time. So theoretically the only change developers need to make is to sprinkle question marks where appropriate. There may be cases where you know that the nullable variable x isn’t actually null, but the compiler cannot figure it out, perhaps because your method of checking for null is deeply nested somewhere. In this case you can use x!.YourMethod() to suppress the compiler warning about potential null reference exceptions.

Async streams are the asynchronous equivalent of IEnumerable. C# has support for iterator methods and async methods, but no support for a method that is both an iterator and an async method. Work to improve this situation has been going on since 2015. The solution is allowing for await to be used in a new form of async iterator, one that returns an IAsyncEnumerable<T> or IAsyncEnumerator<T> rather than an IEnumerable<T> or IEnumerator<T>, with IAsyncEnumerable<T> consumable in a new foreach await. An IAsyncDisposable interface is also used to enable asynchronous cleanup.
The syntax looks like this:

When defining an async iterator, you would use this function signature:

As with normal IEnumerable methods, you can use yield return to build the stream of objects in a lazy fashion.

The benefit of using this instead of IObservable<T> from Reactive Extensions is that the consumer controls the flow rate. This is referred to as a “pull model”. By contrast, IObservable<T> is a “push model”, which means the producer can flood the consumer with a higher flow rate than it can handle.

That is a huge number of APIs, with the potential for even more when extension libraries like Interactive Extensions (Ix) is considered. But Ix, as a part of Reactive Extensions, already has an implementation of many of these, and there doesn’t seem to be a great reason to duplicate that work; So the idea is that Ix will need some improvement and then it can be recommended for when developers want to use LINQ with IAsyncEnumerable<T>.

Default interface implementations are essentially a limited form of multiple-inheritance. This will allow abstract interfaces to fully define methods just like abstract classes. However, abstract interfaces will still not be able to declare constructors or fields. Default interface methods enable an API author to add methods to an interface in future versions without breaking source or binary compatibility with existing implementations of that interface.This isn’t guaranteed, as it would only work when a suitable default method can be devised. The feature enables C# to interoperate with APIs targeting Android (Java) and iOS (Swift), which support similar features. This proposal requires a coordinated update to the CLR specification (to support concrete methods in interfaces and method resolution).

The most cited use case for this feature is the ability to add a Count property to IEnumerable<T>. The idea is that instead of using the Enumerable.Count extension method, developers can get Count for free and optionally override it if they can provide a more efficient alternative.

This is a very debated feature. Check out the conversation on https://github.com/dotnet/csharplang/issues/406.

While you may think this can be accomplished with a long time (compiler) feature of partial classes, it’s not the same. Partial classes need to be in the same assembly, and the compiler simply merges the code together to form a single class. Extension properties, as an example, will not modify the class definition and can live in a separate assembly.

It’s important to note that these properties do not contain state in and by themselves. You, as the developer, need to build that yourself and as with interfaces, you cannot define instance fields in extensions, but you can simulate them using ConditionalWeakTable. You can also define static fields and operators. In addition to properties, events, and operator overloads, they are even considering allowing extension constructors. Extension constructors would be practical in factory and object pooling scenarios.

For more information about the future of C#, check out the C# Language Design Repo and the proposals section in particular.